The use of both scalp flaps, in which a band of tissue with its original blood supply is shifted to the bald area, and free grafts dates back to the 20th century. Hair transplant techniques began in Japan in the 1930s, where Dr. Shojui Okuda, a Japanese dermatologist used small grafts, and even “follicular unit grafts” to replace damaged areas of eyebrows or lashes, but not to treat baldness. Dr. Okuda’s efforts did not receive worldwide attention at the time, and the trauma of World War II kept this revolutionary treatment isolated for another two decades.

The modern era of hair transplantation in the western world was ushered in the late 1950s, when New York dermatologist Dr. Norman Orentreich began to experiment with “free donor grafts” to balding areas in patients with male pattern baldness. Previously, it had been thought that transplanted hair would thrive no more than the original hair at the recipient site.

Dr. Orentreich demonstrated that these hair follicles were dominant over the recipient region, since the new hairs grew and lasted just as they would at their original home. Dr. Orentreich coined the term “donor dominance” to explain the basic principle of hair transplantation which states that transplanted hair continues to display the same characteristics (color, texture, curl, and longevity) of the hair from where it was taken.

Advancing the theory of donor dominance, Walter P. Unger, M.D., a Toronto dermatologist defined the parameters of the “Safe Donor Zone” from which the most permanent hair follicles could be extracted for hair transplantation. Transplanted hair will only grow in its new site for as long as it would have in its original one; these parameters continue to serve as the fundamental foundation for hair follicle harvesting, whether by the strip method or FUE.

In 1977, Canadians Dr. Walter Unger and his brother, Dr. Martin Unger developed a surgical procedure for excising large areas of male pattern baldness called Alopecia Reduction, or more commonly known as Scalp Reduction. Coincidentally, at the same time the Blanchard brothers (Canadians, also) had the same idea and both physician brothers published their findings within a year of each other.

In 1984, Dr. Wayne Bradshaw, from Perth, Australia intro-duced the world to Minigrafts and Micrografts which changed the traditional grafting process forever. By cutting the original 4mm punch graft in half or quarters, minigrafts contained 4-12 hairs, whereas the micrografts contained 1-3 hairs. The smaller grafts resulted in a more natural, less detectable hair transplant.

The earlier “picket fence” appearance and “plugginess” was no longer the expected cosmetic result from hair restoration surgery. With the advent of micrografts-minigrafts, the number of grafts transplanted increased from the 100-125 traditional 4mm punch standard grafts per surgery to several hundred mi-crograft -minigrafts per surgery.

In the late 1980s, Dr. Bobby Limmer, a San Antonio, Texas dermatologist, introduced the use of the stereo-microscope to dissect a single donor strip into small micrografts. Dr. Limmer developed the procedure called “stick & place” whereby one hair technician would pierce the skin with needle and while the needle was being removed slowly, a second technician would feed the micrograft into the tiny hole that was made. By dissecting the donor tissue with microscopes, very precise micro-grafts were now able to trimmed and placed extremely close to one another.

In 1995, Dr. Robert Bernstein and Dr. Bill Rassman, promoted the concept of Follicular Unit Transplantation (FUT) whereby the donor tissue was stereo-microscopically dissected into their naturally occurring one, two, three, and four hair follicular unit groupings, in which they grow naturally. This advance began the quest to dense pack grafts in order to try to obtain more density at the same time recreating hair, which is natural growing, and a hair transplant that is cosmetically undetectable. This also allowed surgeons to increase the number of grafts transplanted per surgery from the hundreds to the thou-sands.

The follicular-unit hair transplant procedure has continued to evolve, becoming more refined and minimally invasive as the size of the graft incisions have become smaller. These smaller and less invasive incisions enable surgeons to place a larger number of follicular unit grafts into a given area. Most hair restoration surgeons now consider FUT the “gold standard” in hair transplantation.

The latest addition to hair restoration is the concept of Follicular Unit Extraction (FUE) whereby a circular punch incision is made to remove one follicular unit graft at a time from the donor region.

This may be an oversimplification, but it is a variation of the old punch method, but instead of a 4mm in diameter circular punch, a 0.9-1.0 mm circular punch is utilized. This procedure was first promoted by Bernstein and Rassman in 2002 in their Dermatologic Surgery article called Follicular Unit Extraction: Minimally Invasive Surgery for Hair Transplantation. The biggest advantage FUE has over FUT is a lack of a linear (line) scar over the donor region. This allows the patient to wear his hair very short without the donor scar being visible to others. 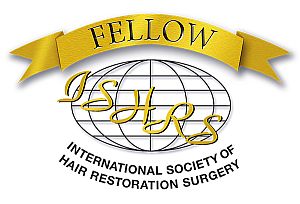