How Hair is Lost, by Dr. Shelly Friedman, DO

Ninety-five percent of hair loss in men is caused by androgenetic alopecia, male pattern baldness. Female & Male Pattern Baldness is driven by three factors, of which the first one is the most necessary.

DHT and Miniaturization: It wasn’t until the 1970s or 80s that scientists began to understand that when an enzyme called 5-alpha-reductase combined with testosterone, it created dihydrotestosterone, or DHT. Dihydrotestosterone is the culprit that causes hair to fall out through a gradual miniaturization process that begins along the same patterns as outline in the Norwood Charts.

This DHT is harmful to hair follicles and “attacks” it, slowly breaking it down, reducing the diameter and length, so that the hair follicle becomes smaller and smaller while the color fades away (See diagram below). These “miniaturized hairs” are also known as vellus hair. Soon, this vellus hair will fall out and will not be replaced by new hair.” 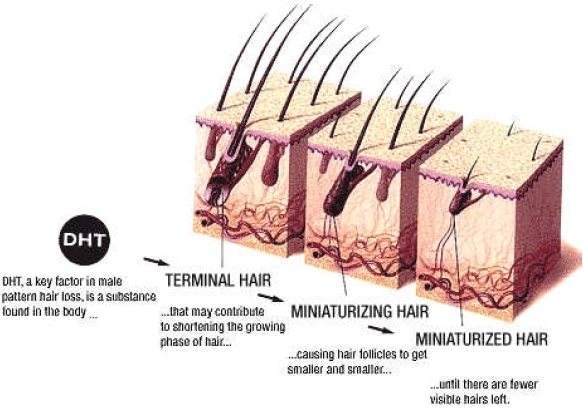 In men, hair that grows near the temple region, front, mid-scalp (top) and crown (back top of head where it starts to go in a 90 degree angle toward the neck) are most susceptible to DHT. Hair on the back and sides of the head (above the ear but below the top, are the LEAST susceptible to hair loss.

The unfortunate circumstance that often takes place with DHT miniaturization is that actual, detectable hair loss is not evident to the individual until 40 to 50 percent of normal of their is already lost. As a result, most women and men do not seek out a doctor’s help until significant hair loss has already taken place.

Enzyme 5 Alpha Reductase: 5-Alpha reductase is a naturally occurring enzyme involved in steroid metabolism. When it combines with testosterone, it becomes dihydrotestosterone, DHT, which scientist recognize as the culprit behind male pattern hair loss. DHT attacks the hair follicles as demonstrated in the diagram above, slowly breaking them down, reducing the diameter of the follicle until it eventually falls out, never to return.

In 1942, Dr. James B Hamilton determined that genetic disposition was a factor in male pattern baldness. Since then, dermatologists and hair transplant doctors would often tell their patients that if you wanted to know how your hair loss pattern would look like, or how severe it would get, take a collective view of all the males in your family on both sides. However, this doesn’t answer the quantifying question of what are my chances of going bald?

A 2004 study that looked at “Family History and Risk of Hair Loss” determined that:

In building his hair loss classification chart, Norwood was able to get exact numbers for each chart class of hair loss based on age, (See Table below). Notice that in his findings, 3 out of 185 men (2 percent) age 18-29 are already a Class 5.